COVID-19: New Opportunities, Deeper Inequalities, Government Action Gaps — What Can We Do?

COVID-19: New Opportunities, Deeper Inequalities, Government Action Gaps — What Can We Do?

As the novel coronavirus spreads all over the world and becomes a pandemic, it has put many countries into a strict lockdown for weeks and challenged businesses, policymakers and service providers. Eventually, it posed many new questions, as well as opportunities, we seemed not to notice before.

Many speculations now arise, with people trying to predict how our world will look like after we contain the pandemic.

Every crisis is also an opportunity.

New innovations that are being introduced quickly to mitigate the emergency have the tendency to stick, as we’ve seen after WW2 for example, and give a new direction to civilisation’s development.

It is undoubtedly an interesting time to live and act in, as well as to observe economical, political, and social changes.

While our minds are running towards the future, trying to forecast, shape and design it, we might actually want to take a step back and look carefully at the present, to make sure we won’t create the future that nobody will want to live in.

The coronavirus pandemic has stripped our very human nature and exposed it to the world.

Inequalities are widening. People with low incomes are becoming poorer; people with high incomes are maintaining their position of power. Healthcare workers, who were already overwhelmed, are becoming even more overwhelmed and mentally exhausted. Teachers are challenged and humiliated even more than before. Households with domestic abuse are becoming more abusive. People with mental illnesses are becoming more ill, those with physical illnesses are being deprived of the much-needed access to medical help. People without homes who were exposed to many hazardous situations now are at even higher risk. Developing countries that were getting closer to overcoming extreme poverty now will be slowed down in their development. Lonely parents without good state support now, more than ever, have to choose between their kids and jobs. Service providers who are supporting our everyday life, whose work is so essential now, are underpaid and exposed to high risks. Displaced groups who were seeking asylum, whose number is growing due to faulty politics or climate change, are now facing even more closed borders.

These are the people who are the majority of our societies. They often don’t have a public face, and they don’t run in the competition of power. Yet without many of them, our societies would have collapsed a long time ago, and certainly now.

However, if you’re more or less familiar with the global situation and you read the news, you probably already know all of that. The problem has been well highlighted and described. What’s important now is to find good, effective solutions to fill the gap left by the policymakers.

Ideas are the most powerful tools.

We live in communities and often have a broad network of contacts. So, after we recognised the problem, all we need to begin to solve it, is a good idea, a good intention in our hearts, and a group of people to start with. Each of us can have that.

P.S. Remember that it’s not about the action itself but about its meaning. 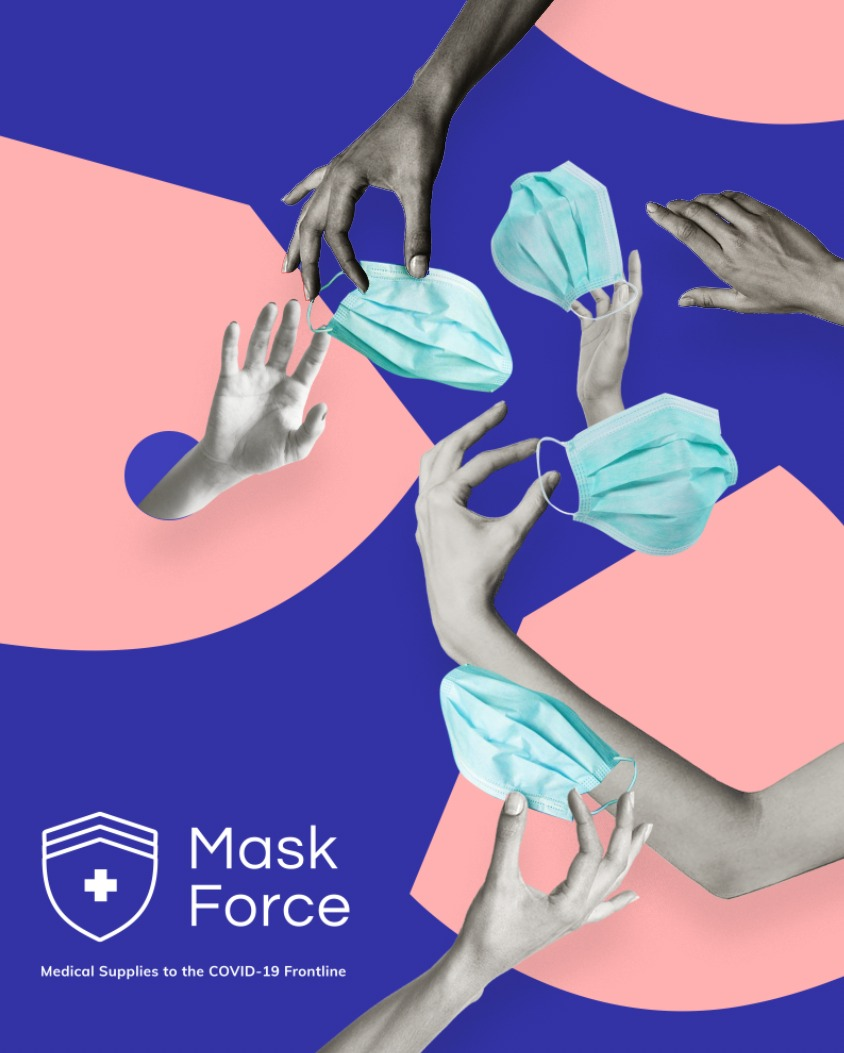 Recently, I had a very interesting conversation with Emily Bauer — one of the initiators of the Mask Force. The project was born out of the brainstorm during the Future Horizon — a festival created to gather Entrepreneurs, Designers, Futurists, Architects, Artists, Ocean Conservationists, Storytellers, Philanthropists, Investors to envision, build and celebrate a new sustainable future. The festival is organised by Matt Cyrankiewicz, a founder of HOO KOO E KOO (a global brand and product studio) and his team.

I asked Emily about their approach, mindsets, and the process. This example can be used as good inspiration and motivation to any community-grown actions you come up with.

Justyna: What is MaskForce and how was it born?

Emily: MaskForce is a group of volunteer entrepreneurs, designers, artists, activists, and supply chain specialists who have come together to create immediate solutions to the observed problem. We’ve come together in response to this health crisis to protect the people who are responsible for saving our lives; medical workers. MaskForce launched to provide unequipped frontline medical workers with high-quality personal protective equipment (PPE), delivered directly from the factory to them. 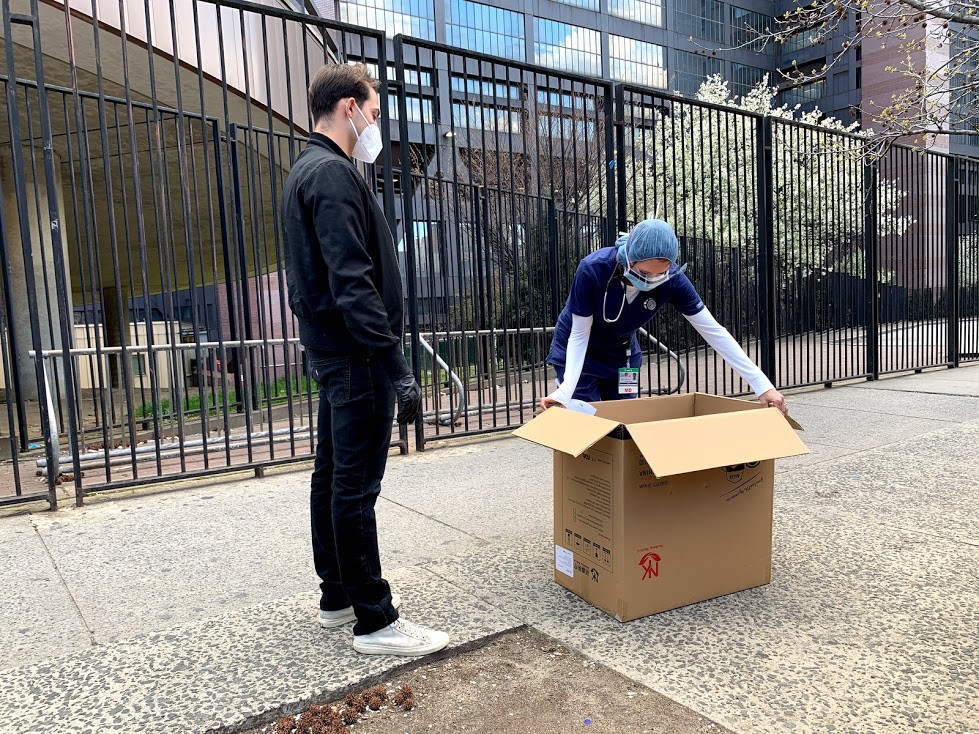 Justyna: What are the actions taken by MaskForce and what’s the impact?

Emily: While government and large philanthropic organizations are working to source large quantities of medical supplies, it takes a long time for these supplies to actually reach the people who most need them. The core problem MaskForce identified is a disconnect between large-scale suppliers, freight services, centralized hospital administration, and the frontline medical staff who have an urgent need for comparatively small quantities of PPE. The biggest need we’ve seen has been among healthcare workers at outer-borough hospitals and clinics.

Once supplies arrive, vigilant volunteers pick them up and distribute them directly into the hands of medical providers. MaskForce has its own delivery team in NYC, and also partners with others, like a motorcycle gang and our partner groups in other cities to get the masks to the people that need them. This ‘factory-to-face’ approach is faster, It also allows us to respond to what we hear from medical workers, and adapt to serve areas that need help. 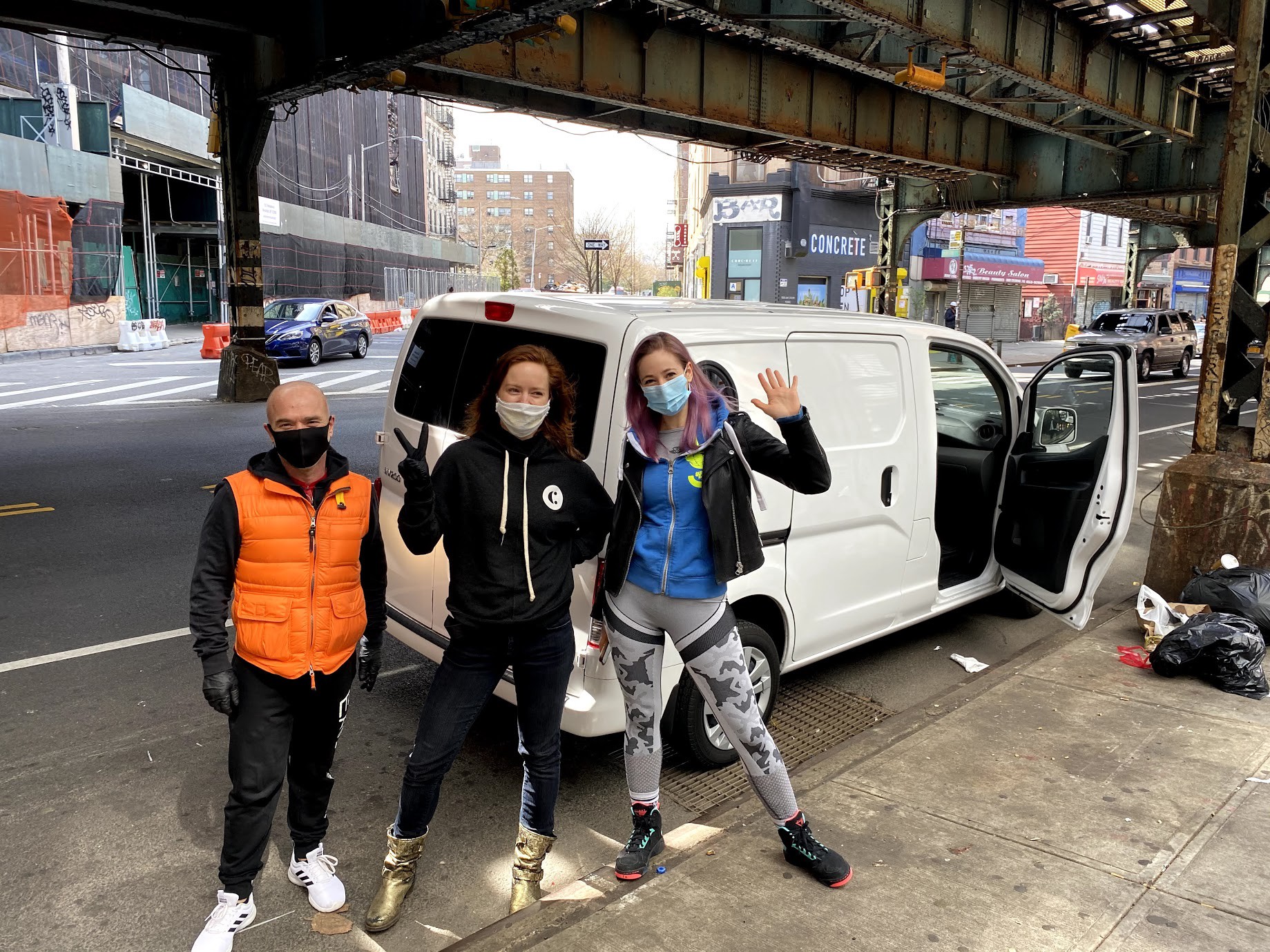 Justyna: What’s the structure of the Mask Force?

Emily: It’s definitely a team effort. Four weeks ago I doubt anyone in MaskForce expected they would become mask experts, but here we are focusing on it day and night. Everyone has made this into what it is by being driven and bringing their skills and connections to push this effort forward. We all keep each other focused on the real impact. I think these times are a test of character in some way and I’m happy to have connected with many great people through this effort.

MaskForce started with a few people and has been continually expanding its network to work with other similar organisations and individuals, eventually creating a sort of organism. We started by sourcing supplies on our own but found when you have players like the country of France placing orders for 1-billion masks, it helps to have larger purchasing power. We worked with MaskForce’s nonprofit, RETI Center, to create a collective of other emergency response campaigns.

We created the platform Rapid Resilience with RETI Center to empower campaigns to do better work as a collective. The advantage of Rapid Resilience is multifold; we share resources and are provided certain securities, but the main benefits are on the two opposite ends of the supply chain; sourcing is better with larger quantities, and we are able to have people on the ground across the country addressing local needs. For example one of the campaigns, PPE for New Mexico, found the Navajo were being severely affected, so MaskForce was able to immediately ship them supplies. Rapid Resilience is distributed but organized and continues to evolve as new campaigns join.

Justyna: What kind of individual approach of initiators of MaskForce made the launch of it possible and now is driving the work?

Emily: I guess we had this understanding that a lot is out of our control right now, but at least this is something we can do and have a positive influence through. We also understood that acting individually won’t take us far, so we created the MaskForce campaign, and then the Rapid Resilience collective. Our scale and geography keep expanding. Excited to see what happens next. 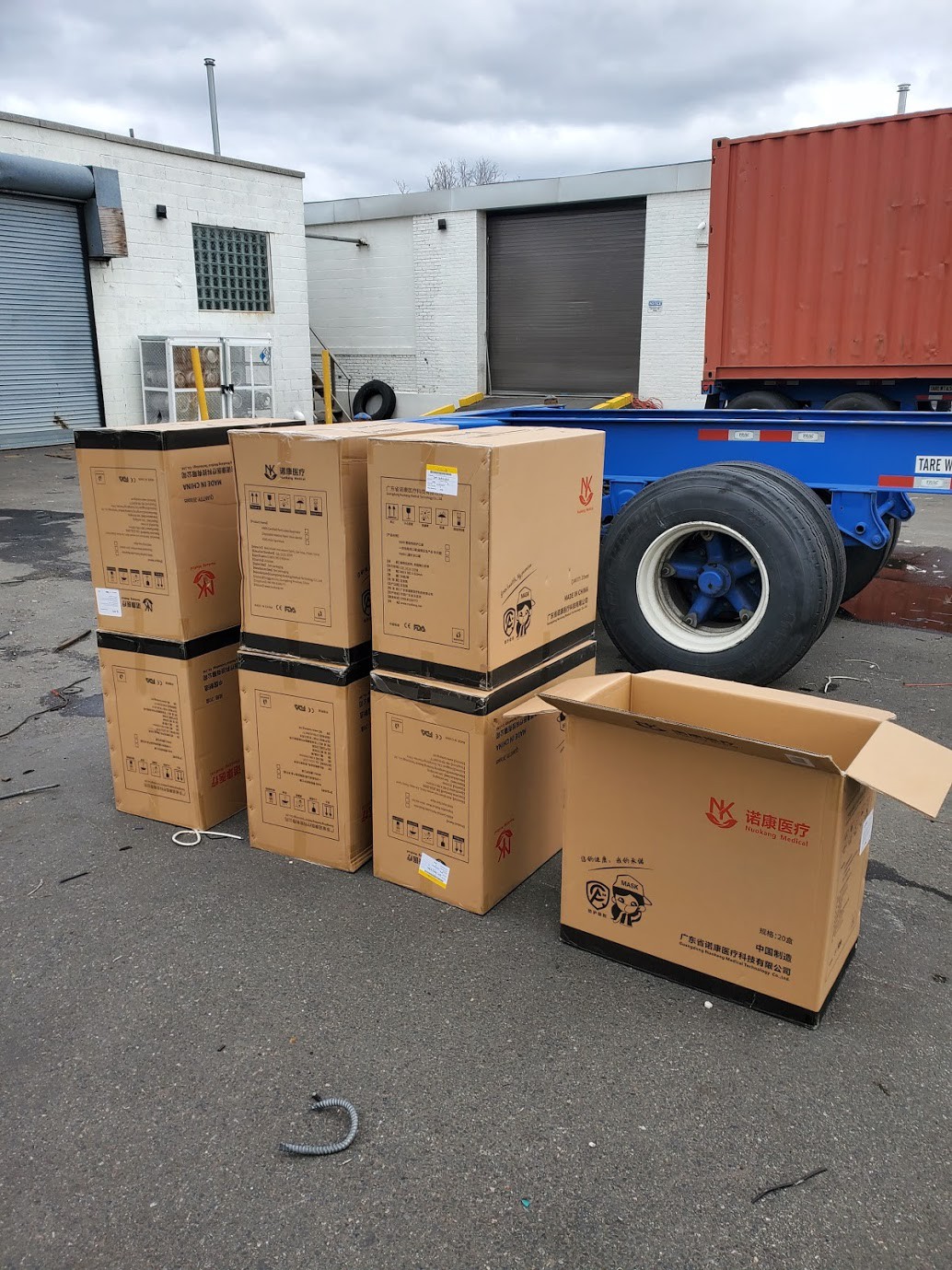 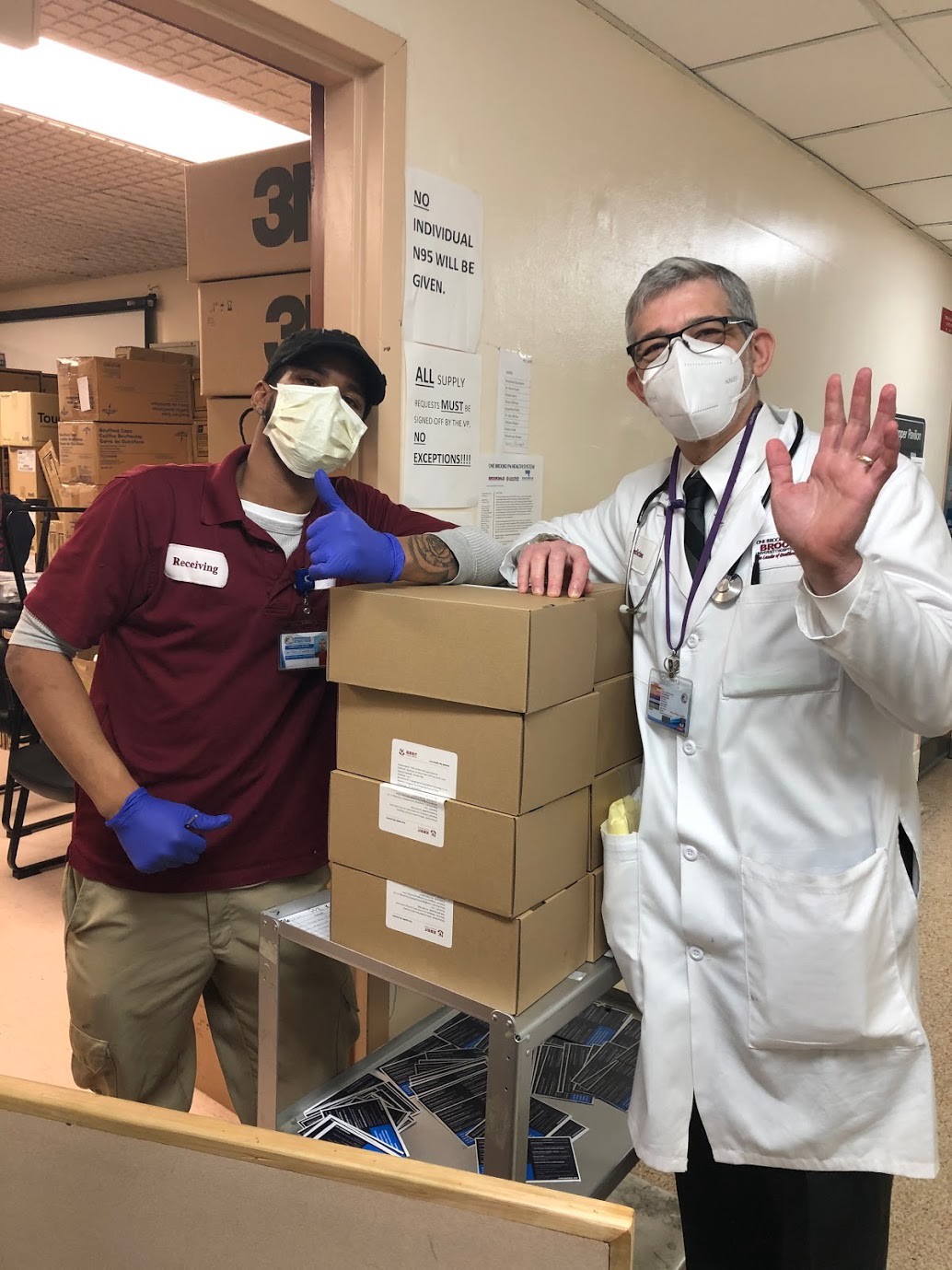 Justyna: How do you get funding?

Emily: Right now, MaskForce has raised about $98,570 of our $100,000 goal, and we’re adapting our focus. Over these last 4-weeks, funding has come from a wide range of generous supporters, from many $25 donations to a large contribution from WeWork. Some of our donors want their donation to go to a certain cause, like midwives, but many just support because they know that every dollar they spent immediately goes towards protecting healthcare workers.

We’re in the process of shifting focus to Rapid Resilience, due to the exponential impact the collective has. Rapid Resilience will be directly fundraising and delivering PPE, but also support these efforts among its network of campaigns. Rapid Resilience has raised $271,000 and has some big-impact things in the pipeline.

Justyna: How much impact, in your opinion, do the citizens have on the situation in their country and their communities?

Emily: In a way, a group like MaskForce is an indication of the importance of individual responses to problems. We’ve worked with all sorts of grassroots groups to protect healthcare workers, and I hope when all this is over everyone will take a moment to be proud of the real impact they had, protecting healthcare workers so they can continue protecting patients suffering from COVID-19. I’ve also been inspired by the healthcare workers we’re supporting, like a large group of nurses who came from around the country to work in NYC’s COVID Units.

The fact that individuals have had to step into the source and distribute masks is both inspiring and quite frustrating. It points out the inadequacy of our government and healthcare systems’ preparation and sourcing — we knew something like this was inevitable.

I’m excited about the exponential potential of supporting a bunch of independent efforts. Rapid Resilience has gathered about 30 campaign partners, and each of these represents a huge team, so that’s about 500 people involved in the action. All of them have seen the need to act to address these unmet critical needs.

It is sort of a miracle that we’ve been able to put together a team of individuals in such a short time and it actually worked and delivered the anticipated result. Who would have guessed a month ago? 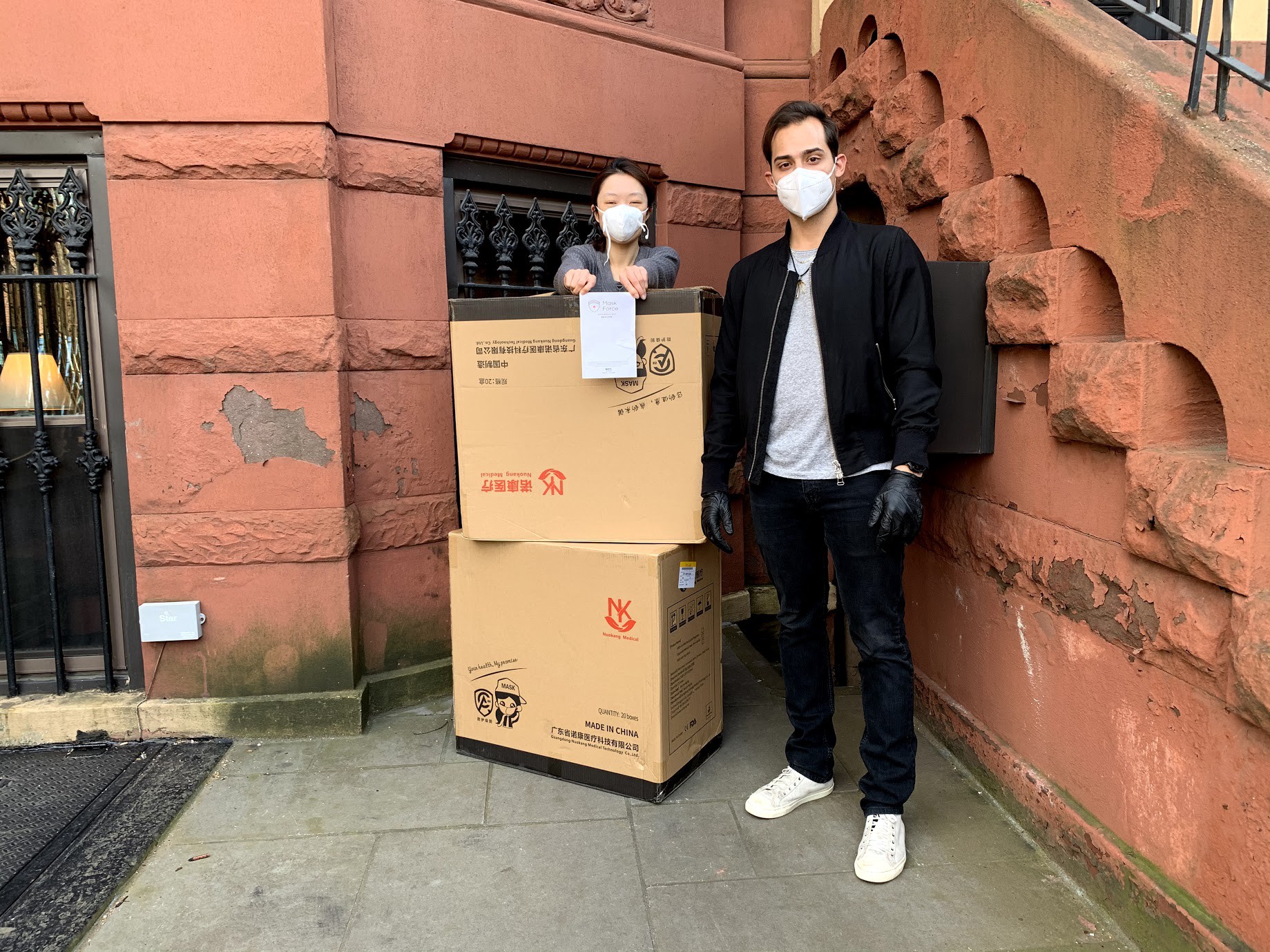 Justyna: Collectively, what can we be doing more of? And how we can be doing it?

Emily: I’d turn your question into the statement: Collectively we can do more. Keep doing it ;)

Starting with MaskForce, we found out that we can do a lot when we come together, people of all kinds of specializations, each having their share in the process.

You can do a lot together as long as it’s organised around a clear vision shared by everybody. Pushing towards an altruistic goal, like helping those who help us, unites people.

There’s no real leader of MaskForce. People who are working harder are recognised as key-people, but nobody is taking the lead. In this case, nobody’s doing it for attention but out of the genuine feeling of the need to help. The risk of having a single leader of a volunteer effort is that they might step down and the whole thing would collapse or because this is so fast-paced they can become a bottle-neck. However, I would say this way of operating isn’t very sustainable. That’s why RETI Center’s Rapid Resilience is so powerful. Rapid Resilience is a platform for ambitious volunteer efforts. The model works past COVID, as a way to respond to any emergency.

I’ve noticed that things flip during a crisis. All of a sudden short-term vision and high-speed action are the most impactful responses. Each moment is more critical, and this calls people to action.